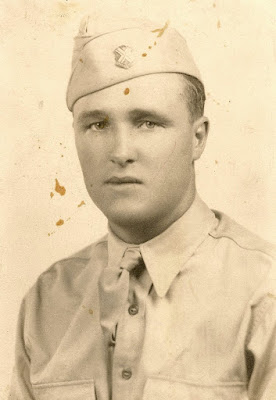 Woodrow was drafted in May 1941.  After his training is was assigned to the 116th Infantry.  It appears that he may have been A and C Companies of the 116th Infantry before being assigned to F Company 116th Infantry.  Sent to England, he trained with the regiment for the amphibious attack on German forces in France. His mother died of heart disease in February 1943. Woodrow was apparently assigned to F Company and took part in the amphibious assault on 6 Jun 1944.  PFC Knighten was wounded on 11 Jul 1944 and evacuated to hospital.  He died of his wound(s) on 14 Aug 1944.

PFC Knighten was repatriated in 1948 and now rests forever near other family members in Elk Run Cemetery in Elkton, Virginia.

Woodrow's grandfather served as a PVT in Lamkin's Company, Virginia Light Artillery during the Civil War.  Older brother, Harvey Lee Knighton, was drafted in Feb 1943 and served until the end of the war, he would die of exposure in 1947.  Younger brother, Jesse Willard Knighton, served from 1940 to 1945 in part as a T4 in B Battery 925 Anti-Aircraft Artillery.
Posted by Hobie at 4:55 PM