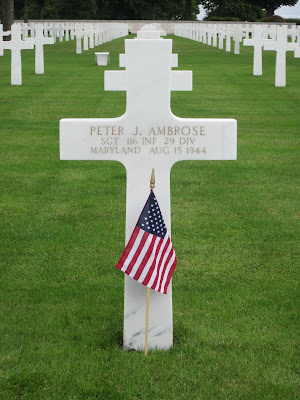 SGT Peter J. Ambrose was born in 1909 to Peter Joseph and Mary Ambrose in Cambria County, Pennsylvania.  Both parents had immigrated from Slovakia and the pre-Anglicized family name was Ambrozatms. His mother died 6 Jul 1936.

Peter was  drafted in June 1941.  He married Elizabeth on 7 Mar 1942 in Baltimore, Maryland where he had been living before the service came calling.  Assigned to K Company 116th Infantry, he was with that unit for the amphibious assault at Omaha Beach.  Then PVT Ambrose did more than is duty and was awarded the Silver Star. His silver star citation: In Normandy, France, on June 6, 1944, during the initial action, when the troops were pinned down behind a hedgerow by the enemy,Sgt. Ambrose, with another soldier, advanced across a mine field in the face of extremely heavy fire with complete disregard for his own safety and set up a machinegun. By this brave act, he furrnished cover for the troops and enabled them to advance. His courage and devotion to duty reflect great credit upon himself and the military service.

On 20 Jun 1944, Peter was promoted to SGT, probably in part because of his demonstrated initiative and leadership.  On 6 Aug 1944 SGT Ambrose was wounded and evacuated to hospital.  He died of his wound(s) on 15 Aug 1944.

SGT Ambrose is buried in the Brittany American Cemetery. Elizabeth remarried and moved to Portland, Oregon.
Posted by Hobie at 12:36 PM