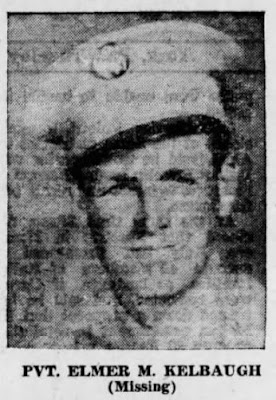 PVT Elmer Melchoir Kelbaugh was born 24 Feb 1914 in Texas, Maryland to William Melchoir and Edith Mae (Jones) Kelbaugh.  His father worked as farm labor in Baltimore county and later on his own farm in York county, Pennsylvania.  Elmer married Mildred Saranda Miller on 17 Nov 1934.  Their first daughter, Dorothy Marie Kelbaugh, was born and died in June the next year. Another daughter was born in 1937 and a son joined the family in 1940.  Elmer worked at the American Insulator plant in New Freedom, Pennsylvania.

Elmer was drafted in December 1943 and trained at Fort Meade, Maryland and Camp Blanding, Florida as the regiment had done in 1942 and was then sent to Europe in July 1943.  On 7 Aug 1944 he was transferred from the replacement depot to I Company 116th Infantry.  Originally thought to be missing in action (and a possible POW) he was later confirmed as having been killed in action on 25 Aug 1944.

The matter of his burial may be confusing.  There is a grave in the Brittany American Cemetery.  There is a cenotaph which has been recorded as a burial in the Bethlehem Steltz Reformed Cemetery in Steltz, Pennsylvania.


His sister, Virgina Kelbaugh, served as a Yeoman 1C in the U.S. Navy at Pearl Harbor having entered service in 1942. Mildred re-married in 1948.
Posted by Hobie at 4:17 PM