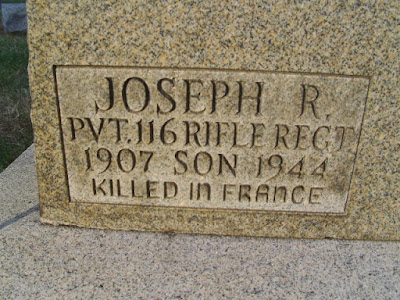 PVT Joseph Raymond Getchell was born 22 Apr 1907 in Erie, Pennsylvania to Calvin and Margaret Valerie (Maloney) Getchell. His father was a carpenter. By 1930, Joseph was also working as a carpenter. On 25 May 1931 Joseph married Elsie Millie Otto in Ripley, New Jersey.  They were divorced 7 Oct 1940 and they had no children.

Joseph had been working as a moulder for some time when he was drafted in January 1944. He was sent to Europe and transferred from the replacement depot to C Company 116th Infantry on 11 Aug 1944.  PVT Getchell was killed in action on 25 Aug 1944.

PVT Getchell was repatriated and he is buried in Calvary Cemetery in Erie, Pennsylvania.
Posted by Hobie at 4:30 PM