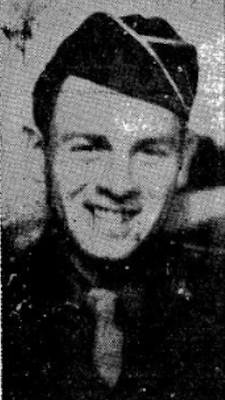 PVT William Byron Pennyfeather was born 6 Oct 1923 in Ogdensburg, New York. He was the 4th of 6 children born to John and Flora Irene (Sherwood) Pennyfeather. His parents were natives of the province of Ontario, Canada. His father worked in a paper mill. William had completed 3 years of high school before entering the workforce. He married Dorothy Weibel in 1942 and the couple had a daughter in June 1943.

William was drafted in November 1943. After his basic military training he was sent to the European theater. On 14 Jul 1944 he was transferred from the replacement depot to B Company 116th Infantry. PVT Pennyfeather was killed in action near Vire, France on 8 Aug 1944.

PVT Pennyfeather was repatriated and re-interred in the Madrid Cemetery in Madrid, New York.