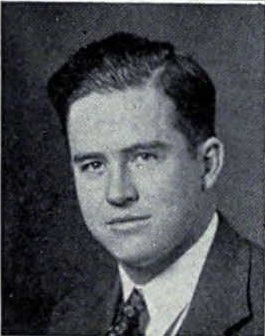 2LT Samuel Greene Licklider Jr. was born 21 Aug 1913 in Belle, Missouri to Samuel Greene and Agnes A. (Allison) Licklider. His father was a cashier in a bank. Young Samuel, "Sammy", attended the University of Missouri graduating in 1937. In the midst of his college education he taught school in the local public schools. In 1940 he was working as a "secretary" for the Social Security administration reporting a 1939 income of $1200. He married a local school teacher, Lyda Frances Halstead, on 1 Jun 1940. He resigned from the SSA to attend law school and was a Junior there in November 1942.

"Sammy" entered the Army in December 1942. He took basic training at Camp Wolters, Texas and then attended Officer Candidate School at Fort Benning, Georgia from which he graduated on 14 Jul 1943.  He then served at Camp Croft, South Carolina and Camp Butner, North Carolina and finally Camp Pickett, Virginia before being ordered to go overseas.  He was sent to England and assigned to the Casualty Officers Replacement Depot and thence to A Company 116th Infantry on 4 Jul 1944.  His son had been born on 17 Jun 1944. 2LT Licklider was a platoon leader of the machine gun platoon and fought with the unit until killed in action on 18 Jul 1944 (although the family believed he was more likely killed sometime between 4 and 6 July).  2LT Licklider had been shot in the lower stomach and was immediately treated but died before he could be evacuated.

2LT Licklider was repatriated in 1948 and now rests forever with family members in Liberty Cemetery in Belle, Missouri. Lyda would remarry in 1949 and she passed away in 1999.  Their son is still living.

Grandfather, James Columbus Licklider, had served as a CPL in the H Company 10th Missouri Infantry (CSA).
Posted by Hobie at 6:36 PM