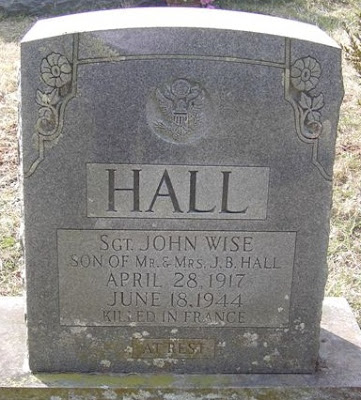 SGT John Wise Hall was born 28 Apr 1917 in Carroll County, Virginia to Joseph Benjamin and Rachel Miriam (Jenkins) Hall.  The family farmed.  In 1940, John was working as a hired hand on a farm.

He was still working as a farm hand when he was drafted in May 1941.  After training he was sent to England and assigned to C Company 116th Infantry.  He trained with that unit for the amphibious assault on the French beaches of Normandy and then participated in that assault with that unit.  On 17 Jun 1944 he was wounded and evacuated to hospital where he died of his wound(s) on 18 Jul 1944.

SGT Hall was repatriated and buried in the Hardy-Jenkins Cemetery in Carroll County, Virginia.
Posted by Hobie at 5:35 AM