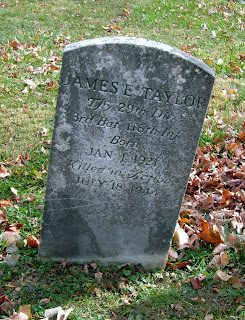 Tech5 James Edwin Taylor was born 1 Jan 1921 in Frederick County, Virginia. He was the youngest of the 3 children of Harry Ignatious and Annie Holmes (Curtis) Taylor. His father first drove a delivery truck for and then was proprietor of a local creamery but the Great Depression took its toll on the business and by 1940 Harry was working as a laborer working in road construction. James was just finishing high school and the family lived at 1219 South Braddock Street in Winchester, Virginia.

James enlisted in the Virginia National Guard in Headquarters and Headquarters Company 3rd Battalion 116th Infantry. PVT Taylor was with the unit when it was federalized in February 1941 and trained with the unit at Fort George Meade, Maryland, in the Carolina Maneuvers near Fort Bragg, North Carolina and at Camp Blanding, Florida before being shipped to England aboard the Queen Mary in September 1942. Once in England he trained with the unit in preparation for the amphibious landing that was being planned as a part of the invasion and liberation of Nazi occupied France. PFC Taylor landed with his unit on D-Day, 6 Jun 1944. He was promoted to Tech5 on 9 Jul 1944 apparently replacing SSG Robert Lee Taylor. He was with the 3rd Battalion headquarters and its new commander, MAJ Tom Howie, as they joined the attack on German forces holding Saint-Lo. Tech5 Taylor was killed in action as the unit entered Saint-Lo on 18 Jul 1944.

Tech5 Taylor was repatriated and re-interred in the Mount Hebron Cemetery in Winchester, Virginia where he rests with many family members.

James' older brother, Robert Randolph Taylor, served as a SSG in the Army during WW2.

Email ThisBlogThis!Share to TwitterShare to FacebookShare to Pinterest
Labels: HQCo3rdBn