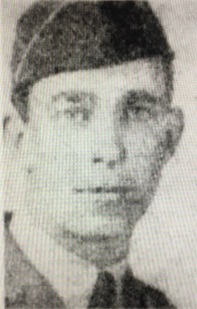 PFC Wilbur Charles Silbaugh was born 13 Aug 1918 in Somerfield, Pennsylvania. He was the 2nd of 7 children and oldest of the 3 sons of Albert and Bessie Marie (Artice) Silbaugh. His father worked as a fireman for many years. By 1935 the family had moved from Henry Clay, Pennsylvania to Selbysport, Maryland. There they owned a home valued at $1200. Albert was still working as a fireman earning a reported 1939 income of $500 and Wilbur was working in the lumber for Oliver B. Frazee and earning a reported 1939 income of $300.

Wilbur was drafted in May 1941. He was sent to Fort Meade, Maryland and was likely assigned to A Company 116th Infantry at that time. He would then have trained with the unit at Fort Meade, in the vicinity of Fort Bragg during the Carolina maneuvers and at Camp Blanding, Florida before boarding the Queen Mary for the trip to England in September 1942. In England the unit trained for the amphibious landing that was planned to be a part of the liberation of occupied Europe. PFC Silbaugh took part in that landing and was apparently one of the few in A Company that was not injured or wounded on 6 Jun 1944. PFC Silbaugh continued to fight with the unit until killed in action on 18 Jul 1944 near Saint-Lo, France.

Email ThisBlogThis!Share to TwitterShare to FacebookShare to Pinterest
Labels: A Company, NormandyAmericanCemetery