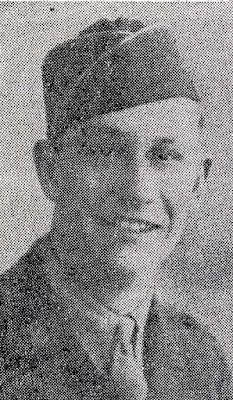 PFC Frederick J Graf was born in 1922.  We think his parents were John Frederick and Mary (Wolf) Graf and he was likely born in New Jersey.

We know that he enlisted (was not drafted) in April 1941 originally to enter the Army Air Corps.  At some point in time before D-Day he was assigned to L Company 116th Infantry and was among those who landed on 6 June.  On 19 Jun 1944 he was killed in action.

PFC Graf is buried in the Normandy American Cemetery.
Posted by Hobie at 7:50 PM