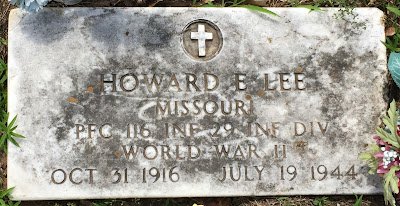 PFC Howard E. Lee was born 31 Oct 1916 in East Prairie, Missouri the second of six children of Willie Wesley and Dovia (Brooks) Lee.  His father was a carpenter and worked as a farm hand. Howard was also working as a farm hand.  On 16 Dec 1939 he married Vivian Asalee Henson.

PFC Lee was repatriated and is buried in Memorial Park Cemetery in East Prairie, Missouri. Asalee would re-marry in 1945.
Posted by Hobie at 8:49 PM