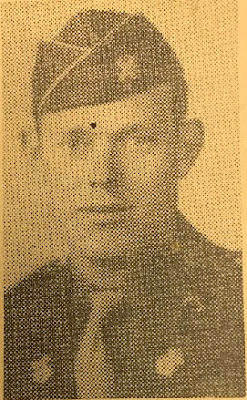 SGT Aaron J Bowling was born in 1917 in Gills Creek, Virginia to James Otey (or Otis) and Francis Edna (Hairfield) Bowling.  The family of 13 was supported by the family farm.  Later, the 3 oldest worked at local businesses to help support the family.  In 1940, Aaron was clerking at a drug store.

Aaron, like many other young men in the depression, joined the National Guard for the benefit of the drill pay.  He was a member of the Roanoke infantry unit when it was federalized in February 1941.  He went with the unit as it moved throughout the U.S. in training and then overseas to England to prepare for the invasion of Hitler's "fortress Europe".  Assigned to D Company 116th Infantry, PFC Bowling landed with his unit, survived and on 20 Jun 1944 was promoted to SGT.  He was killed in action with Walfred Williams on 18 Jul 1944.

SGT Bowling is buried in the Normandy American Cemetery at Collville-sur-mer.