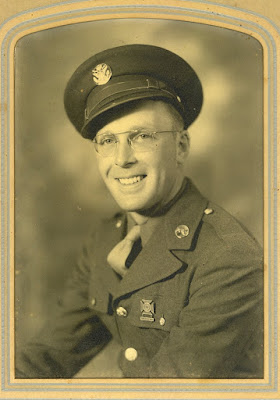 Harlie was still working in the shoe/boot manufacturing business when he was drafted in October 1943. After his training he was sent to Europe and on 25 Jun 1944 was transferred from the replacement depot to L Company 116th Infantry.  PVT Knox was wounded on 19 Jul 1944 and evacuated but died of his wound(s) that same day.

PVT Knox was repatriated and interred in the Notre Dame Cemetery in Springvale, Maine. Brother, Ralph Leon Knox, served from 1942 to 1945. Harlie and Sarah had no children.
Posted by Hobie at 8:07 PM