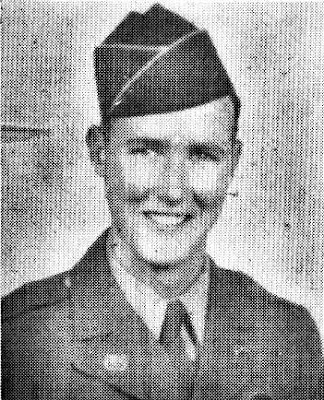 PVT Robert Carey Smick was born in Baltimore, Maryland on 20 Nov 1923. He was the 3rd of 4 children and only son of Edwin Charles and Anna Marie (Baker) Smick. His father was a butcher. By 1935 the family had moved to Newport News, Virginia. Then Edwin became ill for quite a long time and the family was supported by Robert's older sister Betty who worked as a saleslady and apparently a very successful one because she reported a 1939 income of $1600. The family lived at 243 38th Street in Newport News, now the site of a parking lot and Robert attended Saint Vincent's Catholic School. Edwin died in May 1940. Robert went to work for the Newport News Shipping and Dry Dock Company which was just a couple of blocks away from the family home.

Robert was drafted in November 1943. After his basic military training he was sent to the European theater. PVT Smick was transferred from the replacement depot to B Company 116th Infantry on 5 Jul 1944. PVT Smick was wounded in the fight to liberate Saint-Lo, France on 15 Jul 1944 and evacuated to hospital. He died of his wound(s) on 19 Jul 1944.

Robert's father served as a cook in F Company 313th Infantry in France in WWI. He is buried in the Hampton National Cemetery in Hampton, Virginia. His oldest sister, Sister Maria Smick, was a member of the Sisters of Charity of Nazareth for 63 years.
Posted by Hobie at 4:51 AM