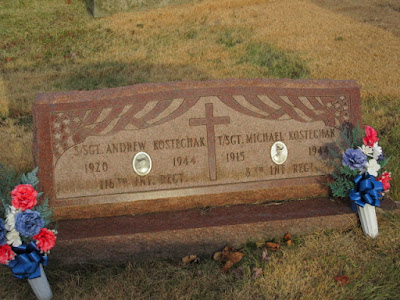 SSG Andrew Kostechak was born 15 Dec 1920 in Cairnbrook, Pennsylvania the fourth of ten children born to John and Susan (Havarilla) Kostechak. His father was a coal miner and by 1940, so was Andrew.

Andrew was still working as a miner when he was drafted in August 1942. He was sent to England and assigned to K Company 116th Infantry. He trained with that unit for the amphibious assault that was to take place at the French beach code-named "Omaha".  He did make that assault with that unit and, surviving, he was promoted from PFC to SSG on 20 Jun 1944.  SSG Kostechak was wounded on 25 Jun 1944 and evacuated to hospital.  He was likely in hospital in England when he died of his wound(s) on 20 Jul 1944.

SSG Andrew Kostechak was repatriated and now rests forever with his family in Saint John the Baptist Cemetery in Central City, Pennsylvania.