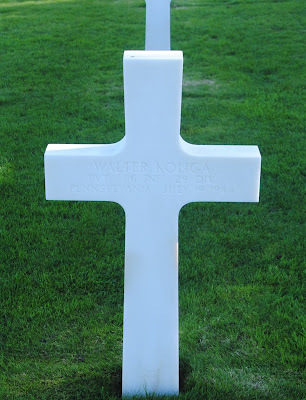 PVT Walter Koliga was born 26 Jan 1910 in Breslau, Pennsylvania one of six children of Frank and Fanny (Maciako) Koliga.  Both of his parents were natives of Poland.  Three of his siblings would die of pulmonary tuberculosis before they were 32 years old. Frank worked in a steel mill but by 1930 was dependent on his sons including Walter who, in their turn, worked in the steel mill.  However, the family owned their home which was valued a $6000 in 1930. By 1940, Walter was still living at home supporting his parents but was now working in a coal mine. The family home was now valued at $1000.

Walter married Leona Katilus on 13 May 1940.  They would have one daughter. Frank died 1 Mar 1942 of an apparent heart attack.

Walter was drafted in April 1943. He was again working in a mill at that time. After his initial training he was sent to England and assigned to B Company 116th Infantry. He trained with that unit for and participated in the amphibious assault that took place on 6 Jun 1944.  PVT Koliga fought with that unit through to Saint Lo and was killed in action on 19 Jul 1944.

PVT Koliga is buried in the Normandy American Cemetery.  His brother, Michael, served in the U.S. Army (G Company 31st Infantry) from 1932-1934 and died of pulmonary tuberculosis in 1943. His youngest brother, Alexander James Koliga attained the rank of TSGT, serving in the Army from 1940 to 1945. Leona apparently never re-married and died in 1986.  Their daughter married and had a child.
Posted by Hobie at 8:21 PM