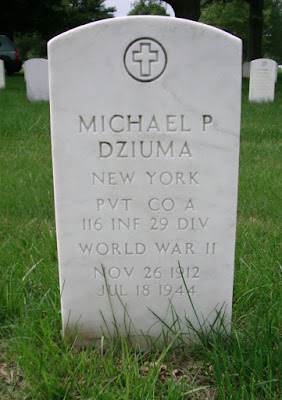 PVT Michael P. Dziuma was born 26 Nov 1912 in the Bronx, New York to Nicholas and Apalonia (Mohylowska) Dziuma.  Both parents immigrated from Galicia i. e. southern Poland.  His father worked as a carpenter and furrier.

Michael was drafted in February 1943. We don't know when but Michael was assigned to A Company 116th Infantry, apparently prior to the D-Day landings.  The only entry in the morning report is that he was killed in action on 18 Jul 1944.

Michael's brother Edward also served during the war but lived until 1987. He is buried next to his brother.
Posted by Hobie at 12:14 PM

Email ThisBlogThis!Share to TwitterShare to FacebookShare to Pinterest
Labels: A Company, LongIslandNC