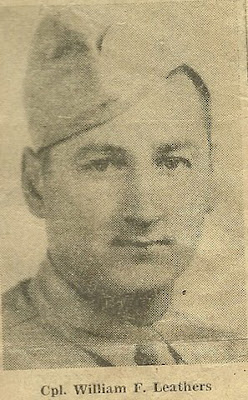 CPL William Franklin Leathers was born 25 Oct 1914 in Grove City, Pennsylvania with his twin sister, Evelyn Katherine Leathers, to Wilbur Franklin and Pearl Clara (Gates) Leathers. Wilbur was a clerk in a steel mill but he died in 1920.  Pearl then supported her two children, and later her parents, by teaching in a public school.  Pearl died in 1931.  The twins were 17 when their mother passed away.  While his sister married, William went to work as a bricklayer and lived with his maternal grandmother who was now widowed.

William was drafted in February 1942. After basic training he was sent to England and assigned to M Company 116th Infantry.  He probably participated in all or most of the training the unit underwent in England as it prepared for the amphibious assault on Hitler's "fortress Europe". William had attained the rank of CPL prior to 6 Jun 1944 when the landing took place.  He fought with the unit through to Saint Lo and was killed in action on 13 Jul 1944.

CPL Leathers was repatriated in 1948 and re-interred in Gettysburg National Cemetery in Gettysburg, Pennsylvania.
Posted by Hobie at 12:47 PM