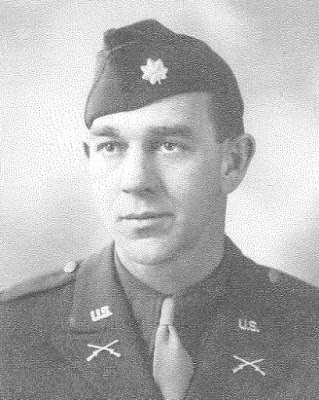 MAJ Thomas Dry Howie was born in Abbeville County, South Carolina the 5th of 7 children of Torrance Victor and Cora Ann (Dry) Howie.  His father was a railroad engineer. After high school, Thomas attended The Citadel where he was an all state halfback on the football team, captain of the baseball team, a Rhodes Scholar finalist and President of the Senior Class (1929). After graduation he moved to Staunton, Virginia where he was an English Teacher, Athletic Director and coach at Staunton Military Academy. Thomas met and married Elizabeth James Payne in 1932 and in 1938 they had a daughter, Sally Elizabeth Howie.

After graduating from The Citadel Thomas was commissioned a 2LT in the Army Reserve. After he had moved to Staunton he transferred to the Virginia National Guard in 1932 serving with the 116th Regiment of the 29th Division. The regiment was mobilized/federalized in Febraury 1941 and reported to Fort George Meade, Maryland.  They then moved to Camp Blanding, Florida for more training and then overseas to England in September 1942.  In England they trained for the amphibious assault on the French beaches of Normandy, particularly the beach at Vierville-sur-mer.  MAJ Howie was the operations officer when he landed with COL Canham on D-Day in the first of two boats assigned to the Headquarters 116th Infantry. The other boat and all aboard were killed by artillery in the landing. MAJ Howie took command of the 3rd Battalion 116th Infantry on 13 Jul 1944. He led the battalion in the relief of 2nd Battalion 116th Infantry which was surrounded by enemy forces.  MAJ Howie had just presented his case for his battalion to lead the regiment into Saint-Lo when he was struck by fragments from an artillery shell and killed in action on 17 Jul 1944. His unit carried him into Saint-Lo and laid his body on the rubble of the Saint Croix Cathedral and covered it with a U.S. flag.  The press called him the "Major of Saint-Lo" and his fame was ensured.

MAJ Howie is buried in the Normandy American Cemetery. A cenotaph has been erected in the Upper Long Cane Cemetery in Abbeville, South Carolina. The National Guard armory (now "Readiness Center") in Staunton, Virginia was named for him.  Memorials to his memory have been placed in Saint-Lo and Abbeville. The Howie Bell Tower is next to the chapel at the Citadel. He has also been memorialized on TV and in film. His daughter continues to actively support the 116th Infantry Regiment Foundation.

Tom's grandfather, Robert James Howie, had served as a 2nd Lieutenant in the 48th Regiment of North Carolina Infantry during the Civil War.
Posted by Hobie at 7:17 PM