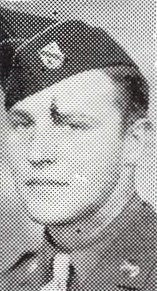 PFC James Louis Miller was born 17 May 1924 in Lancaster County, Pennsylvania. He was the youngest child of Joseph Rutter and Annette M. (Carter) Miller. His mother would died in 1931. His father worked as a house painter but after his mother died when he was 7 James was sent to live with others.

James was working for Nevin's Drug Store in Lancaster, Pennsylvania when he registered for the draft and he was drafted in March 1943. After his initial training it seems that James was assigned to G Company 309th Infantry which was part of the 78th Infantry Division which was a replacement pool division. He was then sent to Europe and transferred to K Company 116th Infantry on 5 Jul 1944. PFC Miller was killed in action on 17 Jul 1944.

PFC Miller was repatriated and re-interred in the Pequea Baptist Cemetery in Gap, Pennsylvania.
Posted by Hobie at 4:44 PM