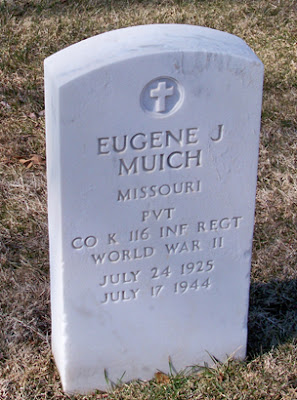 PVT Eugene John Muich was born 24 Jul 1925 in St. Louis, Missouri. He was the 2nd of 5 children born to Michael Daniel and Olga C. (Rother) Muich. His father worked for a brewery.     graduating from Mehlville High School in 1943, Eugene was noted in the annual as the boy most likely to succeed.

Eugene was drafted in September 1943. After basic training he was sent to England and the European theater. On 19 Jun 1944 he was transferred from the replacement depot to K Company 116th Infantry. PVT Muich was killed in action less than 1 month later on 17 Jul 1944.

PVT Muich was repatriated and re-interred in the Jefferson Barracks National Cemetery in Lemay, Missouri.
Posted by Hobie at 9:03 AM