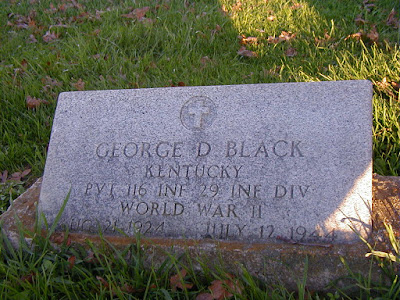 PVT George Dewey Black was born 21 Aug 1924 in Rowan County, Kentucky to Ezra Edd and Grace Marie (Lyons).  He was the 4th of their 7 children and the 2nd son.  Ezra supported the family by farming and later the boys helped and did other work such as carpentry to contribute to the family.

George was drafted in August 1943 and entered service in Huntington, West Virginia.  The morning report apparently has only one entry for PVT Black and that is his assignment from the replacement depot to I Company 116th Infantry on 16 Jun 1944.  PVT George Black was killed in action on 12 Jul 1944.

PFC Black is buried the Caudill Cemetery in Sharkey, Kentucky.