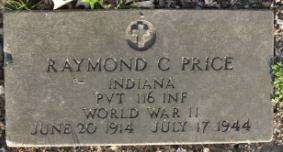 PVT Raymond Charles Levi Price was born 20 Jun 1914 in South Bend, Indiana. He was the 3rd of 12 children born to Walter Charles and Sarah Elizabeth (Simon) Price. The family moved quite a bit as his father had worked as a machinist in Chicago, Illinois before the depression but was then forced to look for work in South Bend, Moline, Bristol, Jefferson, Goshen and Elkhart all of which are in Indiana working as a machinist and then as a farmer. Sarah died in July 1938. By 1940 it was the older sons that were supporting the family. Raymond was working in an automotive parts factory.

Raymond was drafted in January 1942. After his basic military training as a pack artilleryman and light truck driver he was eventually sent to England and assigned to the newly formed Cannon Company 116th Infantry. He trained with the unit for the amphibious attack that was to be part of the invasion of Nazi occupied France. He landed with the unit on D-Day and fought through to the attempt to take Saint-Lo. PVT Price was killed in action on 17 Jul 1944.

PVT Price was repatriated in 1948 and re-interred in the Prairie Street Cemetery in Elkhart, Indiana.
Posted by Hobie at 4:32 PM