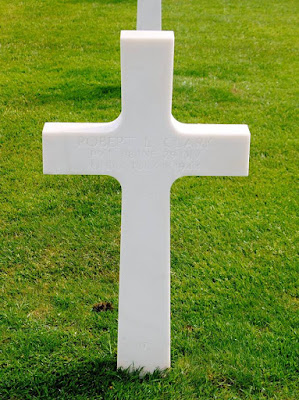 PVT Robert Lee Clark was born in 1922, likely in Ohio to Charles E Clark (we do not know his mother).  In 1940 he was living with his father, step-mother and their 3 children in Toledo but working in a Civilian Conservation Corps camp as a mechanic.

We do not know when he entered service but presume it was about 1943.  In March 1943 he married Nell Thomas of Texarkana, Arkansas.  On 16 Jun 1944 his assignment for duty with B Company 116th Infantry was recorded in the morning report.  Recorded as missing in action for a time, he was found to have been killed in action on 13 Jul 1944.

PVT Clark is buried in the Brittany American Cemetery.

Robert's half-brothers and sister survived him as did his father.  We presume his wife did as well but was very likely re-married by the time final disposition of the remains were arranged in 1946-48 as his father was listed as the point of contact on the internment card.

Email ThisBlogThis!Share to TwitterShare to FacebookShare to Pinterest
Labels: B Company, BrittanyAmericanCemetery