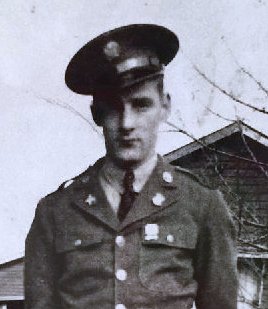 SGT Jacob Clark Rhodes was born 8 Dec 1918 near Linville, Virginia. He was the 7th of 9 children born to Walter Eugene and Gertrude Ola (Geil) Rhodes. Walter supported the family as a station manager for the railroad and by farming before dying aged 61 in 1936. The family members worked to support the family including Jacob who was working as a helper at a local hatchery for which he earned $165 in 1939.

Jacob was drafted in May 1941 and was likely assigned to G Company 116th Infantry soon afterwards when assigned to Fort Meade, Maryland. He would then have trained with the unit there, in the Carolina maneuvers and at Camp Blanding, Florida before the unit went to England in September 1942. Once in England the 116th trained continuously for the planned amphibious landing on the coast of northern France that was to be part of the invasion of occupied Europe. PFC Rhodes was part of that landing on 6 Jun 1944. He most certainly demonstrated leadership and competence and was promoted to SGT on 20 Jun 1944. SGT Rhodes was killed in action as the unit fought towards Saint-Lo, France on 12 Jul 1944.

SGT Rhodes rests forever at the Normandy American Cemetery. There is also a cenotaph for SGT Rhodes in the Lindale Mennonite Church Cemetery in Linville,Virginia.


Jacob was named for his mother's brother, Jacob Clark Geil, who served as a PVT in A Company 128th Machine Gun Battalion in France in 1918. Jacob had one brother who also served in the U.S. Army during WW2, Charles William Edward Rhodes served July 1942 to November 1945.
Posted by Hobie at 6:39 PM