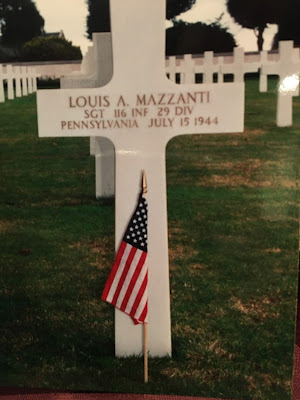 SGT Louis Alfred Mazzanti was born on 2 Jan 1924 in Bristol, Pennsylvania. He was the 4th of 6 children born to Guido di Luigi and Elvira (Cagnetti) Mazzanti. Both parents were natives of Ascoli Piceno, Marche, Italy. His father owned and operated a grocery store in Bristol.

Louis registered for the draft in 1942. When he was drafted in March 1943 he'd been working as a meat cutter in his father's store. After training in South Carolina, Tennessee and Indiana, PVT Mazzanti must have demonstrated competence because he was a SGT when sent to the European theater in May 1944. On 19 Jun 1944 he was transferred from the replacement depot to K Company 116th Infantry.  SGT Mazzanti was killed in action on 15 Jul 1944.