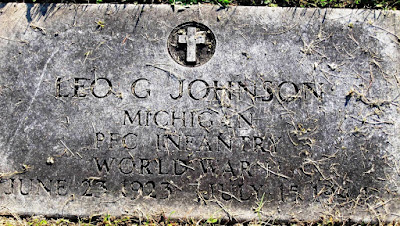 PFC Leo George Johnson was born 23 Jun 1923 in Saginaw, Michigan to George Jacob and Teresa (Schneider) Johnson.  His father was a sheet metal worker in a garage and a mechanic.

Leo entered the service in February 1943.  After his initial training he was sent to England and some time before the amphibious invasion of France on 6 Jun 1944 was assigned to L Company 116th Infantry.  As a rifleman he would have taken part in that operation.  PFC Johnson was killed in action on 16 Jul 1944.

PFC Johnson was repatriated in 1943 and is buried in Mount Olivet Cemetery in Saginaw, Michigan.
Posted by Hobie at 2:59 PM