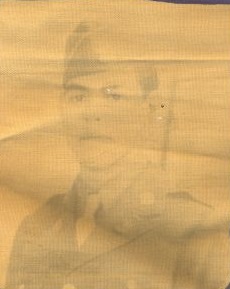 PFC Nestor Montanez Jr. was born 19 Aug 1922 in Guadalupe County, Texas. He was the youngest of 8 children born to Nestor and Adelaide (Longoria) Montanez. The family farmed near McLough, Texas. In 1940 they were paying $3 a month rent.

Nestor was drafted in January 1941. He was likely assigned to L Company 116th Infantry about the time the unit arrived at Camp Blanding, Florida and was sent to England with them in September 1942. There he trained with the unit for the amphibious landing that would be part of the invasion of occupied Europe. He took part in that attack on 6 Jun 1944 and continued to fight with the unit until wounded on 12 Jul 1944 in the vicinity of Saint-Lo and was evacuated to hospital. He died of his wound(s) on 13 Jul 1944.