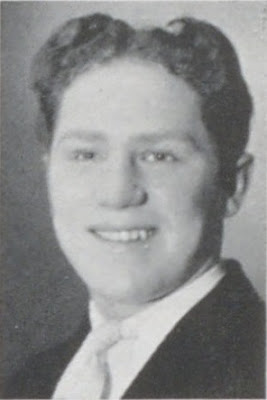 PVT John Leonard Steen Jr. was born 14 Sep 1916 in Cochranton, Pennsylvania. He was the 4th of 6 children, 3 boys and 3 girls, born to John Leonard and Margaret Jane (McKinney) Steen. His father farmed, at first for others and then purchased a farm in Crawford County, Pennsylvania. He sold the farm after 1935 and rented a home on Pearl Street in Cochranton where John Junior attended high school. In 1940 both the father and his 2 adult sons still living at home were all working in road construction for H. L. Moore, Inc. earning a reported 1939 income of $200 each.

John enlisted in the Pennsylvania National Guard in Meadville, Pennsylvania in B Company 112th Infantry. PVT Steen was mobilized with his unit on 17 Feb 1941. Nothing more is known of his service until 19 Jun 1944 when he was transferred from the replacement depot to G Company 116th Infantry to serve as a rifleman. PVT Steen was killed in action near Saint-Lo, France on 14 Jul 1944.

PVT Steen was repatriated in 1948 and re-interred in the Cochranton Cemetery in Cochranton, Pennsylvania.

American Legion Post 836 in Cochranton was named for John. Younger brother, Donald Edwin Steen, served in the U.S. Army Air Force as a gunner on bombers during WW2. Great-grandfather, George Washington George, served as a PVT in I Company 53rd Pennsylvania Infantry (USA) during the Civil War.
Posted by Hobie at 3:44 AM