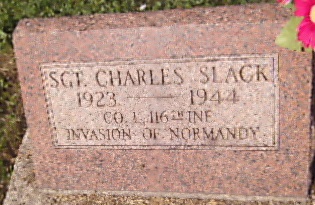 SGT Charles Slack Jr was born 25 Mar 1923 in Portland, Indiana. He was the oldest of the 6 children born to Earl Charles and Mabel Pauline (Abbott) Slack. The family was living at a home they owned at 123 East Washington in Portland valued at $1850. His father was a hammer man at a local foundry earning a reported 1939 income of $1650 which was pretty good for the time.

Charles was working as a clerk when he was drafted in March 1943. After his basic military training he was sent to England and assigned to L Company 116th Infantry. He prepared with the unit for the amphibious invasion of occupied France and took part in the D-Day landings on 6 Jun 1944. PFC Slack was promoted to SGT on 20 Jun 1944. He continued to fight with L Company as a squad leader until killed in action near Saint-Lo, France on 15 Jul 1944.

SGT Slack was repatriated and re-interred in the Gravel Hill Cemetery in Jackson, Indiana.
Posted by Hobie at 7:08 PM