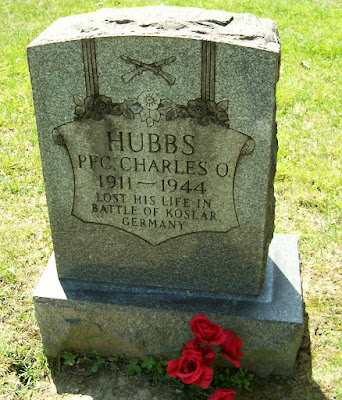 PFC Charles Orlando Hubbs was born 11 Apr 1911 in Glen Easton, West Virginia to Charles Samuel and Elizabeth Ann (Mellon) Hubbs. His father was a carpenter.  Grandparents and cousins lived close by the family. In 1935 he married Ethel Allen and the couple had one daughter. Soon thereafter he and Ethel were divorced. On 22 Jan 1939, Charles married Helen Virginia Rine. In 1940 they lived in Moundsville, West Virginia and Charles was working as a "furnace man" likely doing installation, repair and servicing of furnaces. His reported 1939 income was only $300.

Charles was working as a driver when he was drafted in September 1943.  After his basic training Charles was sent to Europe and on 24 Oct 1944 was transferred from the replacement depot to F Company 116th Infantry.  On 28 Nov 1944, Charles was wounded in the vicinity of Koslar, Germany and evacuated to hospital.  He apparently died of his wounds in hospital in Cambridge, England.

PFC Hubbs was repatriated and now rests forever in Riverview Cemetery in Moundsville, West Virginia.
Posted by Hobie at 7:11 AM