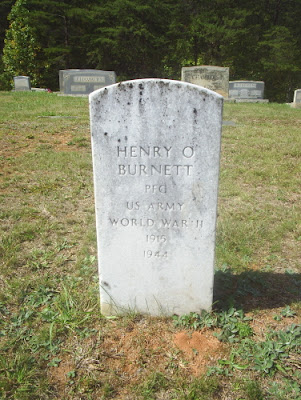 PFC Henry Ogle Burnett was born 4 Jul 1915 in Asheville, North Carolina to Fred G. and Elizabeth W. Burnett. Fred worked in a cigarette factory and farmed. When he could, Henry worked as a laborer on road construction.

Drafted in April 1941, Henry was ultimately assigned to E Company 116th Infantry.  We aren't certain at this time but it appears that he came ashore with the unit on D-Day and survived unscathed until he was killed in action on 3 Dec 1944.

PFC Burnett is buried in the Piney Mountain Baptist Church Cemetery in Weaverville, North Carolina.
Posted by Hobie at 7:04 AM