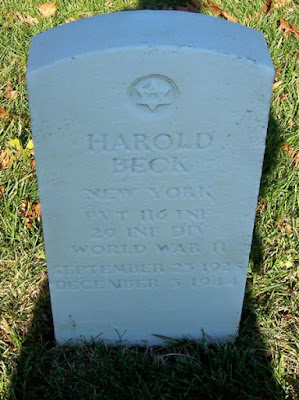 PVT Harold Beck was born 23 Sep 1925 in New York City to Milton and Esther (Spector) Beck.  Harold was their only child.  Milton was a clerk for the US Postal Service.

Harold was drafted in November 1943.  It appears that he was assigned to B Company 116th Infantry before D-Day and survived uninjured until 14 Sep 1944 when he went to hospital.  He returned to B Company on 15 Nov 1944.  Originally thought to be missing in action he was found to have been killed in action on 3 Dec 1944.

PVT Beck's body was repatriated and he is buried in the Long Island National Cemetery.

Milton Beck had served in WWI as a Corporal in C Company 137th Engineers and is also buried in the Long Island National Cemetery.
Posted by Hobie at 6:24 PM

Email ThisBlogThis!Share to TwitterShare to FacebookShare to Pinterest
Labels: B Company, LongIslandNC