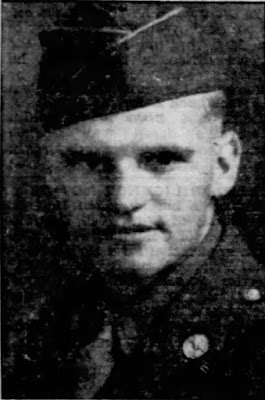 PFC Vernon W. Pillen was born 22 Apr 1922 in Platte Center, Nebraska. He was the oldest of the 9 children born to Henry W. and Otillie Kunigunda "Gunda" (Melcher) Pillen. The family farmed near Burrows, Nebraska. Sister Thelma died in infancy in 1931. Vernon worked on the family farm and we know that he cut off part of his middle finger (which hand is unclear) in 1936 while working.

His finger injury didn't disqualify Vernon for service and he was drafted in December 1942. He was sent to Camp Claiborne, Louisiana for his initial military training and in May 1943 was granted a furlough in conjunction with his transfer to Camp Howse, Texas. In February 1944, Vernon got another 10-day furlough. He was then transferred to the European theater. He went to England and then to France and was transferred from the replacement depot to B Company 116th Infantry on 16 Jun 1944. PFC Pillen fought with the unit until wounded on 5 Jul 1944 and was evacuated to hospital. He returned to the unit via the replacement depot on 5 Sep 1944. He then fought with B Company in the attacks on Brest and Aachen. PFC Pillen was killed in action in the vicinity of Julich, Germany on 3 Dec 1944.

PFC Pillen was not repatriated until 1950 when he was re-interred in Saint Patrick's Cemetery in Platte Center, Nebraska.
Posted by Hobie at 6:58 AM