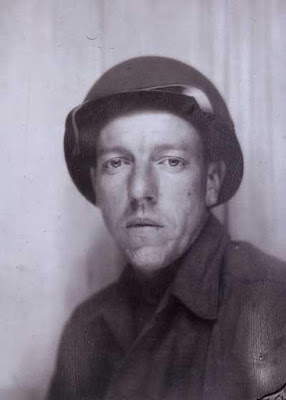 PVT Frederick Evans Cassidy was born in Delaware County, Pennsylvania on 5 Jan 1909 to William J and Jennie B (Whittle) Cassidy.  He was the 5th of 7 children.  His father worked in a silk mill.  When old enough Frederick worked in a ship yard and later as a pipe fitter in a refinery.

In 1935 he married Pansy Mina McGee and they had 2 daughters by Oct 1940 when they divorced.  Frederick had served in 1941 and was recalled to service in September 1943.  He entered service at Fort George Meade, Maryland.

Assigned to B Company 116th Infantry on 17 Jul 1944.  He was in hospital for illness or non-battle injury on 24 Jul, returned to the unit on 28 Jul, wounded on 8 Aug, in hospital until 14 Nov when he was returned to the unit and then killed in action on 6 Dec 1944 near Koslar, Germany.  He rests forever in the Netherlands American Cemetery.
Posted by Hobie at 6:19 AM

Email ThisBlogThis!Share to TwitterShare to FacebookShare to Pinterest
Labels: B Company, NetherlandsAmericanCemetery