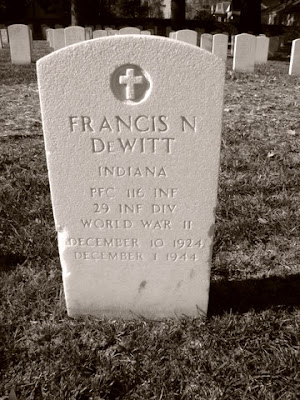 PFC Francis Neal DeWitt was born 10 Dec 1924 in Anderson, Indiana to Lester Anderson and Martha Ellen (Hasitt) DeWitt.  A note on spelling of the family name.  It is common to spell this and other such names different ways depending on the person recording the name and DeWitt appears as "de Witt", "De Witt", and "Dewitt".

Email ThisBlogThis!Share to TwitterShare to FacebookShare to Pinterest
Labels: A Company, NewAlbanyNC