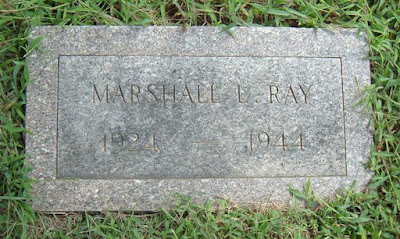 PFC Marshall Lavoyd Ray was born 17 Dec 1924 in Okemah, Oklahoma. He was the oldest of the 7 children born to Daniel Cleborne and Ina Sythena (Hudson) Ray. Both his parent's families had moved to the area in the 1870s. His father did odd jobs and worked as a driver to support his family.

Marshall was drafted, probably in the latter half of 1943, and probably married Dorothy Dixon in that year. It is even possible that he was able to see their son who was born in January 1944 before he was sent overseas to the European theater. PVT Ray was transferred from the replacement depot to D Company 116th Infantry on 9 Aug 1944 near Vire, France. He would fight with the unit as it fought near Aachen, Germany and it was near there that he was promoted to PFC on 9 Oct 1944. As D Company moved deeper into Germany PFC Ray became a non-battle casualty and sent to hospital on 7 Nov 1944. He was returned to D Company from the replacement depot on 23 Nov 1944. PFC Ray then served with the unit until killed in action on 1 Dec 1944.

PFC Ray was repatriated and re-interred in Lightning Ridge Cemetery in Roff, Oklahoma.