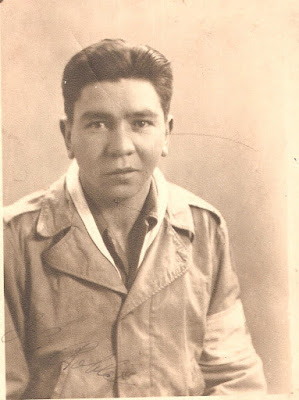 PFC Julian Cerda Robles was born to Antonio Lopez and Carmen (Cerda) Robles on 28 Nov 1916 in San Antonio, Texas.  Both his parents were natives of Texas.  His father worked as a cement worker according to the 1931 city directory.  The family lived at 657 Magnolia Avenue for many years.  Julian was named for his paternal grandfather who was born in Mexico in 1834, prior to Texas nationhood.  Before his death but after the 1940 census, Julian married Olivia Jiminez.  Nothing else is known about his wife but we know that she lived at 1043 Shook Avenue, San Antonio, Texas.

Julian was drafted in June of 1943.  PVT Robles was apparently assigned to Headquarters 3rd Battalion 116th Infantry prior to D-Day.  He went to the hospital on 11 July as a non-battle casualty.  He was relieved from attachment and returned to the Medical Detachment on 18 July.  On 25 July he returned to the 3rd Battalion and then on the 27th was again relieved of attachment.  On 14 Sep 1944 he went to hospital with a "light" wound (but serious enough to go to hospital).  On 23 Sep 1944 he was returned to duty from the hospital and then promoted to PFC on 13 Nov 1944 to be effective 1 Jul 1944.  He was killed in action by an exploding mine on 5 Dec 1944 as he attempted to evacuate wounded from a minefield near Hasenfeld, Germany..  We are still looking for information on his Bronze Star medal but we believe it was for this action.

PFC Robles is buried in the Netherlands American Cemetery.