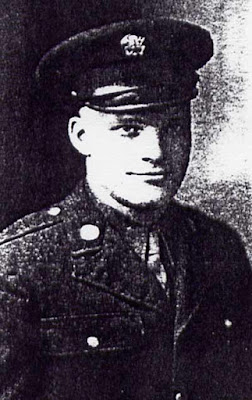 PFC Arnold Fredrik Peterson was born  9 Nov 1922 in Minneapolis, Minnesota. He was the oldest child and only son of John Fritjof and Clara (Anderson) Peterson. His father worked various factory jobs and by 1940 owned the family home at 3516 21st Avenue South in Minneapolis which was valued at $1500. Arnold graduated from Roosevelt High School in 1941 and went to work for at the Minneapolis-Moline Power Implement Company.

Arnold was drafted in March 1943. After his basic military training he was sent to the European theater and transferred from the replacement depot to E Company 116th Infantry on 13 Jul 1944. PFC Peterson was killed in action on 15 Jul 1944.

PFC Peterson was repatriated and re-interred in Lakewood Cemetery in Minneapolis, Minnesota.
Posted by Hobie at 7:40 PM