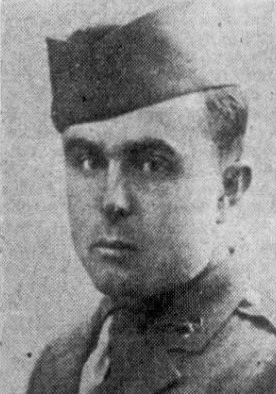 PFC Guy Hansford Rowe was born 20 Oct 1916 near Riverheads, Virginia. He was the 2nd of the 7 children born to James Ovie Wilson and Lillian McBride (Conner) Rowe. Guy had 3 older half-brothers by his father's first wife. His father farmed along Lofton Road in Augusta County. Guy completed 1 year of high school and was working in 1940  as a doffer in a silk mill reporting a 1939 income of $450. Guy bought the farm of 164 acres from his parents in 1940.

Guy was 49th on the local draft board list and was drafted in February 1942. he went first to Camp Lee near Petersburg, Virginia and then overseas to England where he was assigned to B Company 116th Infantry. He trained for and participated in the amphibious landing at Omaha Beach with that unit on 6 Jun 1944. PFC Rowe fought with the unit until wounded near Saint-Lo, France on 14 Jul 1944 dying of his wound(s) later that day. PFC Rowe was the recipient of the Bronze Star medal.