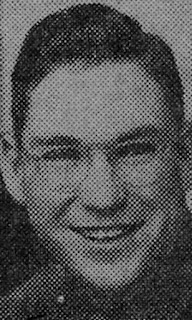 PVT Carl Edward Weinstock was born 17 Jun 1924 in Washington County, Ohio to Charles William and Mary A Weinstock.  The family soon moved from Washington County to Toledo where his father continued to work as a teacher.  Education being important in this family it is no wonder that Carl went to college immediately after graduating from high school.

However, his college career was interrupted when he was drafted in October 1943.  Carl was trained and sent overseas in time to be assigned to G Company 116th Infantry prior to D-Day.  There is no known record of Carl being wounded until 16 Jul 1944 when he was killed in action.

All of his immediate family survived him and his body was repatriated in 1948 and he was buried in Arlington National Cemetery.
Posted by Hobie at 5:25 PM