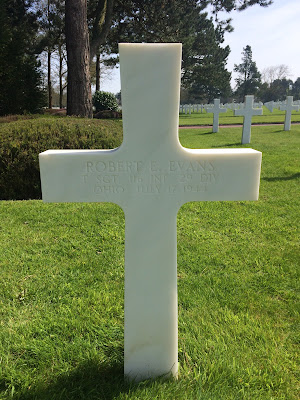 TSGT Robert E Evans was born in 1919 in Pennsylvania to Thomas Leslie and Henrietta (Armstrong) Evans.  The family moved to Barberton, Ohio prior to 1922 where Thomas found work as a hospital janitor and later in the rubber works.  Mother Henrietta was an English immigrant.

After Robert entered the service and completed his training he was assigned to Headquarters 3rd Battalion 116th Infantry and was with that unit on D-Day.  He was promoted from PFC to SGT on 20 Jun 1944.  On 9 Jul 1944 he was further promoted to TSGT.  The enlisted aide to MAJ Thomas Dry Howie, he was killed in action in the same mortar fire that killed MAJ Howie on 17 Jul 1944. He was awarded the Bronze Star.

TSGT Evans is buried in the Normandy American Cemetery.
Posted by Hobie at 6:33 AM